I wanted to spend some time in rural Thailand, I had previously emailed a bunch of places about volunteering, a couple of farms, a couple of animal shelters (there is a large stray animal, mainly dogs, population here), and a monkey sanctuary. No one had replied so this time round I emailed about 20 places with the hope that at least one would reply.

Surprise surprise, several emailed back quite promptly, but due to what happen before I had already said yes to the first farm that replied. I then also made a provisional plan with the monkey jungle sanctuary for the following week, as their program sounded good.

The farm that I will be going too (in a couple of days) is in Pai, North West of Chiang Mai. Pai is a place many people have recommend to me. It is ‘supposed’ to be a more authentic town as not as many tourists venture past Chiang Mai.

Thinking of my budget I decided to move hotels again. Using trip adviser I found a decent looking hostel with private rooms for only 251 a night, (their price is 250 but due to booking online and conversion rate it is 251, this happens sometimes). It was called the Cumpun Guesthouse and I walked there from the Royal Guesthouse using the paper map.

I would be departing for the farm on Saturday the 18th, so I had two days to spend in the city, I didn’t really see a lot of it when I came last month, as we were only here for two days.

I had a look at the leaflets in the lobby and on trip adviser. I discovered a zoo very near about 40 mins out of the city. I hailed a Songthaew, which asked for 100 baht to the zoo as I was the only customer. Normally they charge about 20/30 baht in the North.

When I arrived the taxi driver pointed me towards the joint ticket counter where I could get a combined ticket to the zoo and aquarium.

The first enclosure was some crested cockatoos! My fave bird (I even have a little tattoo of one). The zoo was laid out like a small safari park with the enclosures quite widely spaced apart, but they were in a sort of theme park style with concrete painted to look like wood etc, see pics.

The birds didn’t look that happy, nor did the monkeys, whose enclosure was the worst in the whole park. But as I walked on (past the shuttle bus, which you had to pay more for) the enclosures got bigger.

I fed the hippos, who had a nice pen with a pool. You could buy large chunks of carrot to feed them and they knew what was coming and stood there with mouths wide open. See pics. It was actually quite comical. There was a whole group of people there and the carrots sold out very quickly.

It poured with rain for about ten minutes and I stopped next to the hippos to talk to an American couple who were doing TEFL in China and had a three week holiday which they were spending in Thailand.

After the rain stopped a Thai man came to refill the carrots and I fed the hippos too.

As I moved on, past some fibreglass animals (much like Blackgang Chine in the UK, on the IOW), I found two giraffes, in a decent sized pen with other herbivores, like goats.

I fed these too and at nearly every enclosure you could pay 10 or 20 baht for a plastic tub of chopped vegetables, and in the big cats cage, you could buy raw meat on a stick to poke through the bar! Yes this is true! I have never see this in a zoo before.

Edventually I came to the aquarium, which had a massive fibreglass sharks head protruding from the roof. It was a decent enough size but you could only go in one tunnel as the other was under construction. The tunnel I did go in had a very fancy conveyer-belt that would take you round (but the power was turned off, maybe they turn it on during busy periods).

After the aquarium I walked round the last third of the park (you could walk all the way round on the concrete road) and then reached the entrance again at around 4.30pm, which managed to concede with some other people leaving in a songthaew.

Back at the hotel my room was now ready (it wasn’t this morning at 10am when I arrived), so I collected my main bag, from where I had left it in reception (quite safe).

I walked out about fifty metres to a street food stall, where I had a lovely chicken salad (this is English chicken salad, as in Thai food a salad is a complete different dish), but a disgusting orange squash, which I didn’t finish.

I then visited the night market and replaced my flip flops with a new pair and bought a few souvenirs. The last stop of the night was of course, 7-11. 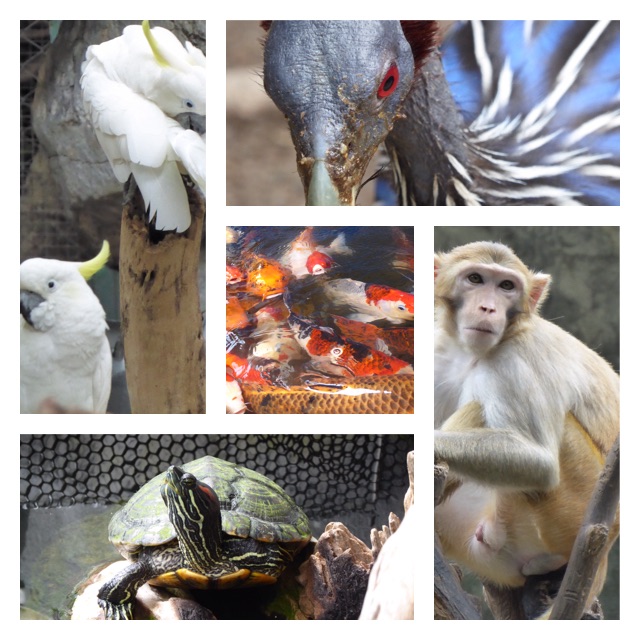 A flavour of the animals at Chiang Mai Zoo – Thailand

This morning I chatted to a Silja on facebook, she and the others were off on their three day jungle trek today. I told her about my plans for the Farmstay.

Then I headed off to find several museums that I had found on trip adviser (and which were vaguely marked on my paper tourist map).

My first stop turned out to be to buy a pair of those baggy hippy traveller trouser (you can buy them all over Thailand). I had been considering a pair for a while and my justification was that I didn’t have a pair of trousers that I could use for messy activities on the farm.

Then very shorty I came across a lovely temple. It was very calm and peaceful, they were playing some oriental music from speakers set high in the walls. 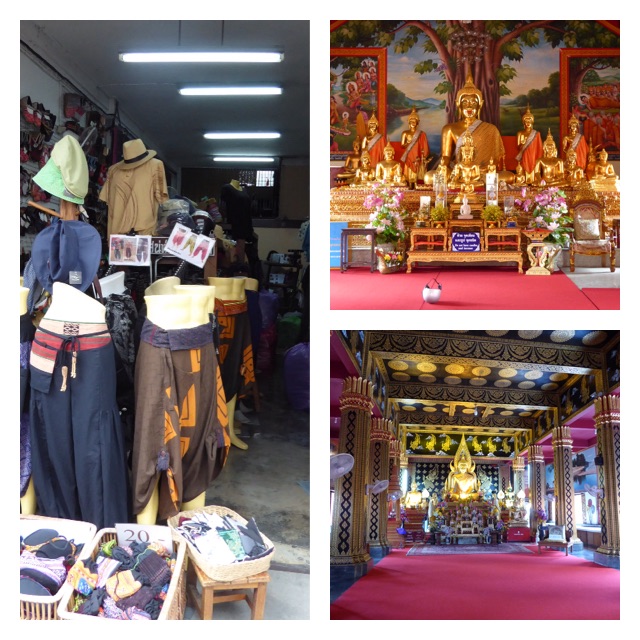 The trouser shop where I bought my baggy trousers, and the first couple of temples I visited.

I moved on and aimed in the generals direction of the museums. On the way I stopped at another temple, this one had quite large buddha statues and was set in a small area of grounds with a seating area. They were also playing music.

I had an early lunch from one of the street stalls, there where quite a few Thai people eating too. It felt like people used this daily, much like a canteen crossed with a local park.

There were quite a few stalls dotted about selling the usual souvenirs. One lady showed me a necklace she claimed was crocodile teeth, which at the time I didn’t believe (most of these teeth are moulded resin) but you will see in a later post, having been to a crocodile farm (in a few weeks) it is quite possible that this was true.

I was a bit lost so I asked a local (in Thai) where I was, and he spent ages pouring over my map. After a while a couple of ladies came over to help and we came to conclusion that the temple we were standing in wasn’t on the map!

Of course they found this very funny, most simple things will get a Thai in stitches, but they pointed me in a vague direction. I didn’t hold out much hope for this as the Thai people seem to be very inaccurate when it come to directions.

I found the Architecture Centre/Museum and another nice temple next too it. There was also a young monk school here as the area (and the public toilet) was full of mini monks (boys around 7 to 11 years old).

Then I found the ‘Chiang Mai Historical Centre‘ which was much more official looking, with a leaflet and map not unlike the museums in England, but it was very small.

There was a farmers market on today outside the museum, just a handful of stalls, I had a glance but there was no point me buying anything as I had nowhere to store it.

I was just reading the history of Chiang Mai in the museum when the lady came over and asked if I had paid and where was my sticker (they always sticker you in Thailand). Oops, the architecture museum had been free so I had assumed.

Anyway I went back out and paid my 90 baht entry fee (foreigner price lol, the sign is literally labeled price for Thai 20 baht and price for foreigner). I was given a sticker to wear and a paper ticket as well.

The museum was air conditioned and very modern. I read quite a bit about Chiang Mai’s history but I have forgotten it all now…..

Down in the basement they have some (not greatly exciting) archeological remains of an old ‘Wat Phra Kaew’, from the Rattanakosin Era.

I also found an interesting statue of ‘TheThree Kings’, the legendary founders of the City of Chiang Mai.

The lovely seating area outside a temple, my fave buddha of the day, some religious hangings swaying in the breeze though the temple door, ‘The Three Kings’ statue, the legendary founders of the city.

Got a Songtheaew back to my hotel as I had been walking in the heat all day.

Tonight I met Daniel, Silja’s friend from Denmark, he hadn’t gone on the jungle trek with the others and was planning to spend a week in Chiang Mai and then we made a provisional plan to meet up after my week on the farm.

He came and collected me from my hotel and we explored the two larger night markets and tried lots of different street food. As well as Thai street food there was a lot of world-food available.

I also booked my bus to Pai from the hotel for tomorrow lunchtime.

Next up: days forty-four and forty-five.

Do you have any thoughts on this? Leave a comment :) Cancel reply

What do you want to read about?

A visual insight to William Stone

Flying this morning!June 4, 2015
Flying out today for my summer in Thailand!